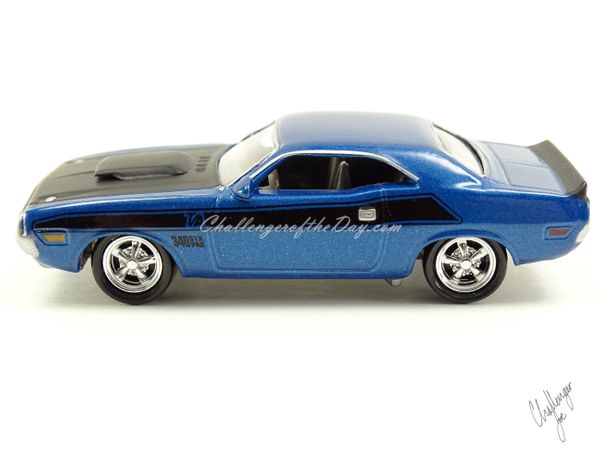 Today's challenger is a 1998 release from Johnny lightning. On a little Johnny Lightning kick. The differences between this body style and the 1996 model I posted a few days ago are clearly apparent. This car looks just like the picture of the real one. There were only 2,399 real Challengers produced with the 290 horsepower, Trans Am 340 Six Pack version. Of those less than 1,000 came with a 4 speed manual transmission. An Air Conditioner was not optional on this package. It would have taken away from the power scheme. You could opt for a sunroof, rear window defroster as well as an applied vinyl cover for your Hardtop with even more chrome trim.

Johnny Lightning made 17,500 of this model. Far surpassing the actual production they were reproducing. There are three features on this car that make it extra special to me. First is the light gray interior. Most interiors on die cast cars are black. Next is white. Anything else is just not very common. Second is the Paint. The Metallic in the real cars color stood for the shiny flecks mixed in with the paint. It also added a new dimension to the car that wasn't there before. This Lastly, my favorite feature is the chrome dual exhaust tips that stick out from in front of the rear wheels. When I was a little kid I used to always draw cars with the exhaust coming out from the sides in front of the rear wheels. These are some of the first hot rods I remember. I know it seems wrong to have the exhaust where it is, but it looks so right to me.

Check out the additional views of this 1971 Dark Blue Metallic T/A Challenger with a 340 Six Pack.