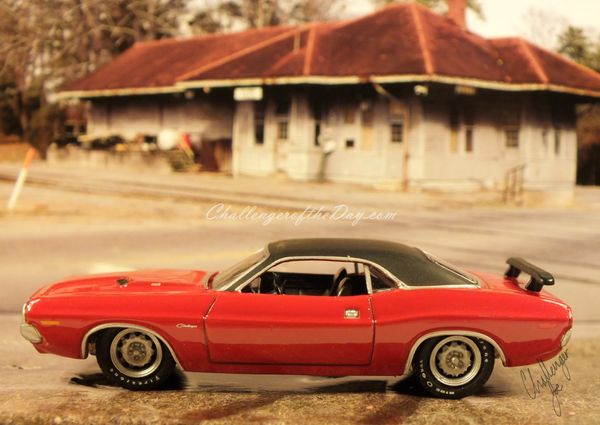 Today's Challenger is a 1971 RT with a 426 Hemi engine from the Greenlight Hot Pursuit series. Also included in this set is a 1978 white Trans Am, the police car. Since there is no description of the Challenger on the package please let me fill in the blanks.

In 1971 there were a total of 27,377 Dodge challengers produced. Of these, only 71 had the 426 Hemi engine with dual four barrel carbs. Shaker hood was an option, but they came stock with the Power Bulge hood shown here. Putting out 425 hp this would have been one hard to catch car.

I really love the detail around the black hardtop, silver paint to look like chrome trim. The wheels look really awesome along with the Firestone tires. The one thing I cannot show you in pictures is how heavy this car feels. You can feel the weight of the little hood while holding it open. Just like the real one. When the hood closes it drops with a heavy metal clang. Last but not least is the high rear spoiler. Would be hard to see over if this wasn't the kind of car where you don't really pay attention to what's behind you.