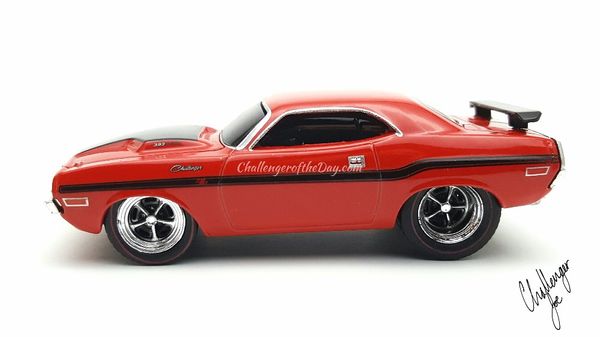 This M2 Ground Pounders 1970 Dodge Challenger R/T is full of really cool features. Starting with real rubber tires on deep-dish rims, a painted base with silver and black detailed exhaust tips, silver painted door handles, fuel filler cap, turn signals with red & orange details front & back and window trim too! A detailed engine with a healthy amount of chrome under the heavy metal hood and the graphics are really sweet too! With full length body side stripes, Challenger & R/T logos, 383 Magnum and DODGE lettering on the hood. So Awesome!!

Two screws required to hold it into the base should give you an idea of the weight of this car. I don't normally go around smashing my die cast Challengers into one another. In fact I never even considered it before. Maybe some of my other die cast cars - but that's another story. If I were to smash my die cast Challengers into one another though I would definitely put my money on this one. It's just such a Heavyweight!

Imagine pulling up next to this - and all you can see when you look over is the tinted dark windows. One look at all that rubber on the rear, the power bulge hood, and all that gleaming chrome coming off the bumpers and, well you can see its pretty menacing too!

It's not difficult for me to get excited about any die cast Dodge Challenger. But with some, like this one, it's also not easy to stop! M2 Machines by Castline really puts the 'M' in Mopar with this Fantastic ground pounding Dodge Challenger!!!

Check out some of the other photos of the M2 Ground Pounders 1970 Dodge Challenger R/T.

Previous Challenger of the Day Posts

Make sure to check out some of the previous Dodge Challengers that have been showcased on our website! Enjoy. 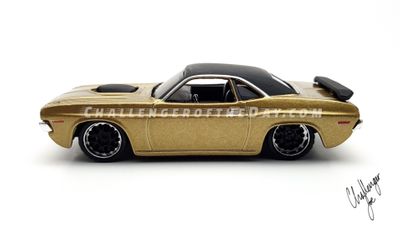 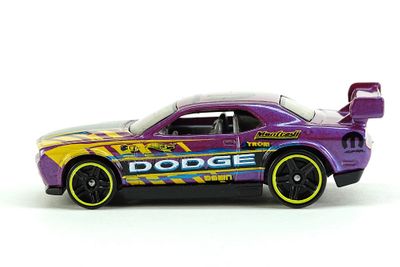 Even standing still today’s Dodge Challenger Drift Car really looks like it’s drifting! The pearlescent paint is more like a Ghost Pearl and changes shades as you move it in the light. Experiencing this kind of paint on a full-scale vehicle is usually jaw dropping. Seeing it in this 1/64th scale Challenger by Hot Wheels is nothing short of Amazing! Capturing this car in one shade is also nothing short of impossible. With DODGE on the... 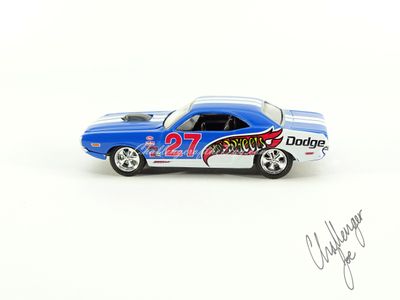 Hot Wheels gets the checkered flag before it even leaves the box with this 1970 Dodge Challenger!

440 Six Pack, Shaker hood, Real rubber tires and an Awesome paint & decal combination help make this a Real jaw-dropper. Turn it over and it does not stop there with a detail painted metal base. By far one of my favorite Hot Wheels Challengers. This car is Heavy! In more ways than one. Oh, and about the variance between the year on...