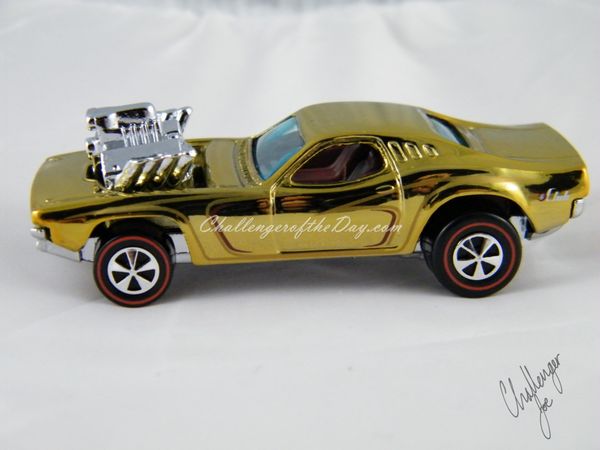 Is it a Challenger? Or is it a Charger. Let me set the record straight. The Rodger Dodger has been called a mixture of both. The body style for the 1970 Dodge Challenger was taken from an old sketch for the Charger. They never used the old design for the Charger, so it was still new when they went back to the drawing board to design the Challenger body. It's only natural that the Challenger had many design cues from the older brother Charger. They also shared engines, suspension and other features. I do see a lot of Charger in the Hot Wheels Rodger Dodger.

Let us talk about the Hot Wheels Dixie Challenger. I haven't posted one of these yet. When I do you will see that Hot Wheels used the same body casting as they did for the Rodger Dodger. The only difference is that the Dixie Challenger has a flat hood where the Rodger D. has the over-blown engine. If Hot Wheels is comfortable calling this body style a Challenger then both models are Challengers. End of discussion for me.

This gold chrome Challenger is just awesome. It is a limited edition run of 2,544 and is from the Super Chromes RLC Rewards Series. Only members of the Red Line Collectors club could purchase this 2010 release. I was not a member in 2010. But I am proud to say that I am a new member as of 2012. It wasn't an easy club to get into. But that's another story. Every day brings new Challengers. I don't know how you would see over the engine but I do know you could only go straight and really fast in one of these monsters. There is not a 1/1 scale version of this car to the best of my knowledge. Probably a good thing.

Check out other photo views of the Rodger Dodger Gold Chrome Challenger.